Dear WingTsun teachers and students, this month my thoughts have turned to the subject of emotions when teaching and learning WingTsun – especially from the teacher's point of view. 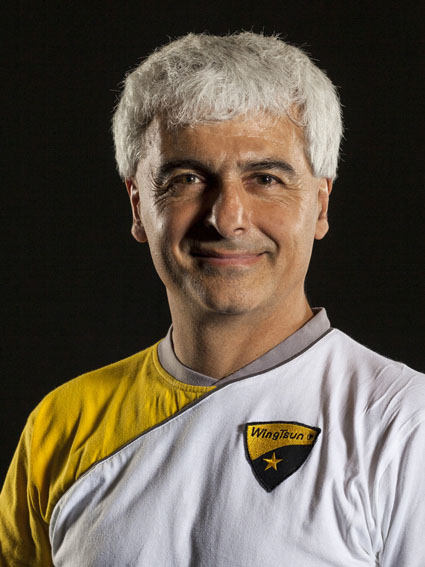 As teachers of WingTsun, we want to make it possible for students to learn and help them to do so. It is neither about laying down the law nor about demonstrating our own, superior skills. Nonetheless, almost everybody who teaches has probably encountered the following situation – and males rather more often than females:

The class is going really well. Everybody is having fun. The students are making every effort to perform, their exercises well. The teacher is just as enthusiastic as he demonstrates exercises with various students. Suddenly the dynamic mood changes when this happens: the teacher demonstrates an attack using one of his students. The student is supposed to defend against it as he has been shown. The student is nervous and wants to perform his task as well as possible. He imagines to himself that he is being attacked in earnest, and suddenly "defends" as violently as if the attack really is serious. The surprised teacher immediately feels his own adrenalin rush and rising anger over the disproportionately hefty reaction, asking himself: "Is he trying to challenge me?", and then he instinctively makes a more hefty response. He realises to late that the student is actually feeling insecure, and for a moment he has lost his grip over his own emotions. The student has been struck and is perhaps in pain, and the fright does the rest. The student is completely confused. After all, he only defended as best he could. The good mood is no more.

Both the student and teacher have fundamentally reacted in the same way in the situation, by responding to a perceived threat. The student to an imaginary threat, the teacher to a real one. It is a fact that teachers are frequently at risk of injury owing to such overreactions by their students. So the teacher has to defend in order to prevent harm. At the same time his role as the teacher requires that he keep his striking power under control. And last not least, he wants to look supremely capable in front of his other students, which means that he will not allow himself to be hit. All this together places the teacher under a considerable degree of stress.

In such a situation a student understandably reacts with confusion and withdrawal. He is not aware of doing anything wrong, and is disappointed in his teacher. He cannot understand why the teacher showed such a violent reaction, and feels that he has been physically punished.

The situation is equally unpleasant for the teacher. He has the nagging feeling that he failed to keep on himself for a moment. Despite the threat of injury, it is expected of him as a teacher – and indeed he expects it of himself – that he could have resolved the situation more calmly and capably.

Where do these strong emotions come from in a training situation?

The human brain has difficulty in distinguishing between an imagined threat, as is the case during an exercise, and a real threat. An attack equals a threat, so the brain immediately goes into emergency mode, triggering instinctive reactions. Adrenalin is released. "Fight or flight" comes into play, and in a teaching situation it will (almost) always be "fight". Consciously considered reactions are not possible in moments like this – either for the student or the teacher.

Over the years a teacher becomes increasingly experienced, has long since ceased to regard most of these situations as a threat and is able to respond more calmly. Yet for him too, critical moments still occur occasionally. They can never be entirely eliminated from martial arts training, as they are in the nature of things. And in the interests of self-defence, neither would that be desirable.  After all, the point is to learn to handle threatening situations, and to understand our own stress reactions to turn them to our advantage.

How should an inadvertent exchange of blows be handled?

Speak to the student about it. Do not leave him on his own. Explain to him what happened, and why you reacted as you did. Tell him you are sorry it happened, even if you know you did nothing "wrong". An apology is not an admission of guilt, and does the recipient good. The student knows that you did not intend to punish or humiliate him.

Approach the teacher. Tell him you are shocked by the violent reaction and do not understand what caused it. Ask him to explain what you could do differently in future.

How can we prevent such situations from occurring in the first place?

•  has already done things differently from what was asked in the past.
•  is fearful of launching the attack. He has a fear of failure.
•  loses control over his movements.
•  breathes more rapidly.
•  already has lots of muscle tone at the contact point.

If these aspects are borne in mind, students are better able to understand and their self-assurance will increase, as will their enjoyment. The demands made of them are not too high or low, and they are motivated to learn. In this relaxed atmosphere, the student feels safe and is far less likely to panic.

As a student you will naturally experience emotional situations with training partners. You will be annoyed with people who know it all, become angry when your partner always has to get the last punch in, or simply be a little afraid and feel you are not up to the exercise. Learning a martial art is after all not a dancing lesson, and makes many demands on us.

Use the opportunity to:

As a result there will often be laughter and joy when something new has been mastered again.